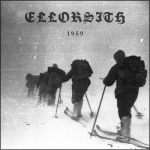 Caligari strikes again with another release from the crypts. The label that brought us some great, sometimes quite obscure releases in the past stays true to its belief and presents ELLORSITH to the Metal world. Not much is known about this Scottish four piece, no real line-up, no history – nothing. But it can be said for sure that “1959” is their first offering. Lyrically, the band is very ambitious, since the songs on this Demo EP center around the Dyatlov Pass Incident that happened in Russia in 1959 (read more about it here). Musically, the Scots are as ambitious, having found their own way on the threshold of Death and Black Metal to create an atmosphere fitting to the mysterious happenings of the story they tell on “1959”. The intro ‘Vvedénije’ already creates a very dismal and depressive atmosphere and gives way to the opening ‘Susurration’, which is not the whisper the title promises. Instead, a blackened atmosphere reigns the song, that sometimes reminds of bands like ISKRA and gets replaced by more dark Death Metal elements towards the end. With the lengthy ‘Marasmus’, ELLORSITH created a gloomy piece of dark matter that gets fueled by both Death and Black Metal of the darkest kind, yet it features some great, harmonic as well as disharmonic guitar guitars. Next up is ‘Lichyre’, that is straighter and not as monumental, even though some guitar disharmonies spice up this one either. In the end, ‘Compelling Natural Force’ takes a similar way than ‘Marasmus’, but in a more harsh way of being epic and dark. The length of over nine minutes includes an outro as well, that picks up where the intro left off. Well, for a first sign of life, “1959” is damn impressive, original and ambitious without overshooting. I’m pretty sure that ELLORSITH will have a hard time reaching this at times monumental offering. To check it out, visit the band at: http://ellorsith.bandcamp.com/releases, where you can get hold of the digital version. But lovers of physical copies shouldn’t be satisfied with that and go for the tape version. As it is known for Caligari releases, the tape will be pro-quality and limited to 100 copies that will be gone soon. So check: caligarirecords.bandcamp.com or www.caligarirecords.com