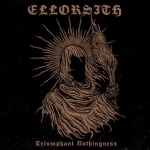 Canadian blackened Death Metallers ELLORSITH have been hard at work the last 4 years. Not much is known about the band and at one point I thought they were from Scotland, but regardless they have been cranking out material in the form of EPs and splits since 2014. Ellorsith is old english for a journey into the unknown i.e. a kenning for death. This year Dark Descent Records has made life easy on us by gathering all 11 tracks of material released and put it all together in one CD. The collection includes the following: 2014’s “1959” EP, 2016’s split with MANNVEIRA, and this year’s “Orbhais” EP. Right off the bat what caught my attention to the band was not only the music they created but also the concepts they use as resource for their songwriting. The band members must be history buffs as they rely on several historical mysteries such as on their “1959” EP the band used the Dyatlov Pass Incident for inspiration. The incident involves the mysterious death of 9 skiers / hikers in the Russian Urual Mountains in 1959. On the split album the band focused both songs on the mystery of a paraplegic man named Jerome that was discovered on the coast of Sandy Cove in Nova Scotia in 1863. The man apparently did not speak English and only said the word ‘Jerome’. I could not find a historical reference to the “Orbhais” album but looking at the songs and lyrics I can only suspect that it was a mash up of several non-historical factors. Musically the band writes some really solid blackened Death Metal that at times sounding a bit atmospheric with sick guitar riffs and grabs your ear. At times you can hear a bit of INCANTATION, GRAVE MIASMA and CRUCIAMENTUM. The tempo mixes from fast paced to slow doomy-ish but overall crushing are the best ways I can describe the band’s sound. The only thing from the production side that really lacked was that on all of their releases the bass drums are barely audible, but otherwise the rest is solid. The music is catchy and easily pulls you in. Overall this is a great add to the music collection as it gathers all the material the band has issued out to date in one CD. You can’t go wrong with this band and is well worth the listen. Time will tell if we will get a full length album, but if it does I can only imagine what historical reference they will use and how the music will just annihilate. More info at: www.facebook.com/ellorsith, www.darkdescentrecords.com