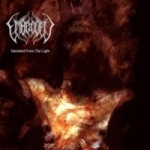 Even though EMBEDDED’s origin already dates back to 1994, with a self-titled demo release in 1996, the nucleus of the band unfortunately splitted up in 1998 because of musical differences. But luckily guitarist André Danowsky decided to give the whole project another go, with three new recruited members, already one year later. This line-up recorded the MCD “Fragments Of Horror”, which gained them quite a lot of enthusiastic attention within the Death Metal underground pretty quickly. Two of the songs also appeared on a split 7″ with DISASTROUS MURMUR, released by Perverted Taste Records shortly after. With a slightly changed line-up (a new vocalist and second guitarplayer joined the band), the guys finally entered the studio to record their debut full length “Banished From The Light”, which features eleven brutal and straight into your face Death Metal erruptions, that are musically quite obviously heavily inspired by the American scene. Despite the factor of unoriginality, the album still sounds incredibly fresh, with its deep grunted, very intense vocals (some of the screamy back-up’s were contributed by SECRETS OF THE MOON frontman Daevas) and the almost perfectly arranged and extremely well performed / produced songmaterial. It’s very easy to recognize that these guys still totally enjoy what they’re doing – and they’re already doing it with international class! So, if you simply can’t get enough of brutal Death, then you gotta make sure to spend some money on EMBEDDED as well. A very impressive debut, of another highly promising German band. The CD sells for €12 (Germany), €14 / $14 (Europe) or $16 (rest of the world). All prices already include postage (airmail delivery) and packaging. Contact: Revenge Productions, c/o Daniel Wenderoth, Elisabethstr. 31, 67227 Frankenthal, Germany, info@revengeproductions.com, www.revengeproductions.com