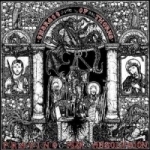 What is it with Greece? There must be something in the air or in the water there. I just did another review on DEUS IGNOTUS, a really good Greek band and RAVENCULT’s "Morbid Blood" was an amazing discovery for me too. Besides cult acts such as ROTTING CHRIST, VARATHRON, NECROMANTIA, THOU ART LORD and the likes. Now, as I am listening for the fifth time to EMBRACE OF THORNS’ third full length "Praying For Absolution", I just can’t explain why many of today’s great bands come from there. I can only compare this phenomenon to the mid-late 80s Brazilian Metal outburst. Because the evil and primal atmosphere is a similar characteristic in both cases. EMBRACE OF THORNS have been active since 1999 and they have released 4 demos, 3 splits and a compilation, besides their previous 2 albums. This is (surprisingly) my first encounter with their music even though I’ve read interviews and extensive features about them in different printed zines. But I never went past their corpse paint imagery. Damn I was missing on some great music! As I have stated before, I am not a fan of intros / outros or preludes to songs and there are 4 found in here. "Such a waste of good suffering" to quote my fave horror movie character, but anyway; after the (oblivious) intro the album starts its ear-ripping journey into a combination of Doom like parts, slow sorrowful riffs and fast, almost blastbeat speed changes. There are also mid-paced passages mixed in just to make "Praying For Absolution" a perfect listening experience. The lead guitars are not flashy nor technical, but they blend in adding weird melodies and harmonies depending on the mood of each song, which I find really interesting, since the leads tend to be "mini-songs" themselves. And the rhythm guitars have great minor-scaled based riffs. The drums keep changing without becoming one-dimensional, mainly because the patterns are rarely the same. Now, the vocals are a highlight, with Archfiend DevilPig delivering deep growls, hoarse screams, shrieks and everything in between. Production wise, most instruments are clear in the mix. The snare drum sound is a little muffled sometimes and the bass is buried deep in the overall mix. But the music keeps up with the heaviness nonetheless. I think that all these details help preserve the shadow over the 47 minutes of utter darkness found in this slab. If you ask me, I think this album has it all to easily become one of the best releases of this year. It’s just incredible, to say the least! So go ahead and contact them now to get "Praying For Absolution". You won’t regret it! Their info can be found here: www.facebook.com/home.php#!/EmbraceOfThorns, www.myspace.com/embraceofthorns, www.nwnprod.com