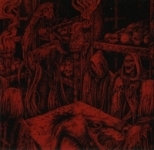 The effective use of repetition is an art lost on many practitioners of Death Metal. All too often the assumption is made that the intricacy of Death Metal is predominantly related to the level of technicality employed by the musicians. A distinctly different form of richness can emerge, however, through the use of repetition. This works particularly well with simple yet powerful riffs that, when properly presented to the listener, can plunge him into a hallucinatory trance. VON may have been the most effective band at both writing such riffs and repeating them unflinchingly just long enough to allow the music to alter the mind-state of the listener. Greece’s EMBRACE OF THORNS have also proven to be masters of this technique on their second full-length, “Atonement Ritual”. Far more impressive than their first album, “Atonement Ritual” delves more deeply into the darker elements of Death Metal and eschews much of the bestial character that the band relied upon on its first album. Here, EMBRACE OF THORNS focus on cultivating simple, precise, and elemental Death Metal. The term simple should not be assumed to be a pejorative in this case, however. The creation of a pure and simple riff unencumbered with needless frills is not an easy task which is why so many bands hide beneath a cloak of technicality instead. The riffs employed on “Atonement Ritual” are laden with venom and presented plainly for the listener to judge. It is only with boldness and confidence that a band can release such an austere work because, if the songwriting were not completely sound, this album would fall flat. EMBRACE OF THORNS clearly do not lack confidence in this regard and the resulting work is magnificent. They establish riffs and repeat them until their pestilent character is fully manifested. Every chord is meticulously selected. Every note carries such gravity that the all of the surrounding notes bend in its wake and converge upon a singular point and then the cycle repeats. Engaging and hypnotic, each song builds upon a simple structure that is typically only subjected to nuanced and delicate changes all of which demonstrate the level of craft with which EMBRACE OF THORNS approach their music. The band shows its ability to accentuate the songs at exactly the proper moments with the use of guitar leads or occasional vocal effects, yet they never resort to gimmicks of any sort. The drums are left slightly low in the mix even though it is clear that the drummer is playing furiously loud throughout the album and is perhaps the most chaotic and unrestrained member of the trio, while the bass guitar assumes a more central role than on most Death Metal recordings. The guitars create the core of the song structure, yet are mixed in such a way as to never render the drums, vocals, or bass obsolete in the mix. Often the drums are delivered in a frenetic and anxious pace while the guitars ring out and riffs are played at half the speed of the drums. The effect is disorienting and represents EMBRACE OF THORNS’ control over their palette of disorder. The release is executed with precision and perfection on every level – musically, lyrically, artistically. Nearly flawless, this album quickly saturates the mind of the listener and demands repeated listens. www.nwnprod.com