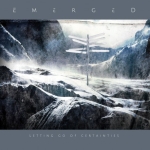 EMERGED from the Netherlands is a project, which was founded back in 2009 by Tom and Bastiaan of Doom / Death veterans PHLEBOTOMIZED, who are also active again and who really made some good music back in the 90s. So I was curious to hear, how this background could lead into an instrumental Rock project without vocals as normally I am not into any music without vocals, but EMERGED managed to hit me with the opener of their mini album called ‘Dark Corner Of My Mind’. This track has a strong edge of Doom / Death, and if the guitars would have been more low-tuned, it easily could have fitted on the last PHLEBOTOMIZED release back in 1996. A really good Rock track with a catchy and somehow dark lead melody and a heavy rhythm guitar. The second track ‘Don’t Speak’ is far more 70s Rock orientated with some influences of BLACK SABBATH, but also some METALLICA shows up in the rhythm guitar section. Crazy mix but another fine Rock track. ‘Get A Life’ is an uptempo song, with some influences of classic 80s Rock music or the early incarnations of Heavy Metal. The bass line and some weird solos, sounding like PINK FLOYD, make this song really enjoyable as well. ‘Emerged’ is going back in time again and sounds like another song, originally based on ideas for PHLEBOTOMIZED, as the melody and mood of the song is very melancholic and Doom / Death based. The last track ‘Who Am I To Judge’ is the heaviest track on this mini album, with some Heavy Metal tunes and some Doom / Death influences again, transferred into Rock music. For Fans of PHLEBOTOMIZED during their "Skycontact" era or fans of OPETH, this release can be of interest and after a while, the listener really forgets about the missing vocals. I am curious now to see, if this project continues, or if these and similar ideas will lead into new material by PHLEBOTOMIZED. Another fine release by Vic Records, known for their good taste. Check these guys out at following locations: www.facebook.com/emerged.metalband, www.vicrecords.com