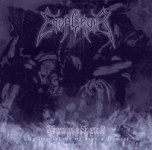 EMPEROR’s farewell album (at least for me) turned into a huge disappointment. And the reason is plain and simple – I can’t consider it as a real band effort with all necessary EMPEROR trademarks! The musical abilities and production is absolutely out of the question here – it’s the songwriting in general, which is simply too much focused on Ihsahn’s personal musical preferences. If you ever got your hands on the PECCATUM and THOU SHALT SUFFER releases, you will probably know what I’m talking about. The entire material got even more complex than ever before and therefore is heavily lacking in the dark atmosphere the band used to create on older releases. All you get is tons of weird guitar licks, riffs and keyboard sounds, but at the end of the day most of it unfortunately goes nowhere. I hate to say this (as I enjoyed everything that came out under the EMPEROR moniker so far!), but “Prometheus – The Discipline Of Fire & Demise” is a little too ambitious for my taste. It often is so weird that you could call it jazzy and that doesn’t really work too well in combination with the brutality (mainly due to the vocals) that is still left from the old days. It probably would’ve become a way better album if Ihsahn would’ve stuck to the classical inspired parts (‘In The Wordless Chamber’ is a kinda cool song in that direction), as those too styles fit together a lot better when it comes to creating dramatic eerie musical scenarios. With this album EMPEROR unfortunately can also be added to the list of fellow Norwegian acts ARCTURUS, ULVER, MAYHEM, COVENANT, DODHEIMSGARD etc. who all started out straight and brutal and became more and more experimental later on. Too bad, really… Maybe this should’ve been released as a Ihsahn solo effort (which it basically is…), under his own name instead of using EMPEROR for his creativity overflow.