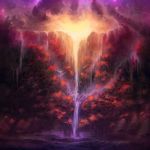 Two years after their self-titled debut the four guys from EMPYREAL VAULT are back with album number two. Once again a playing time of half an hour, once again an interesting cover and once again a gripping dose of technical Death Metal. Not that kind of typical technical Death Metal like BLOOD INCANTATION, TOMB MOULD or OBSCURA, but more in the vein of bands like CRYPTOPSY or early KATAKLYSM. Deathcore, so to say. Due to the often ridiculous emo / wanna-be evil imagery the description Deathcore is a danger sign for most Metalheads, including me. But in the case of EMPYREAL VAULT one should make an exception, because the album has more to offer than whiny weariness and dull songwriting. Instead “Judgement” comes along with an outburst of ideas and different elements. Starting with a soundtrack like intro, the music is meandering between ultra fast blast beats, technical guitar work and stomping mid-tempo frenzy. At a certain point the listener reaches a point of vertigo, but EMPYREAL VAULT are not taking it to extremes. Not like so many other technical Death Metal and Deathcore bands, when there is always another break, another solo, another blast beat, another boring pile of uninspired riffs. Instead the quartet from France is keeping things short (seven songs in half-hour plus intro) and they even manage to incorporate clean female chanting (‘Call Of Yggdrasil’) and synthesizer sounds (‘The Judgement’). So, all in all the second full-length by EMPYREAL VAULT healed me a little, but only a little, from my Deathcore allergy. Anyone else who might be in need of a cure should grab the medicine here www.facebook.com/empyrealvault or here www.facebook.com/greatdanerecords