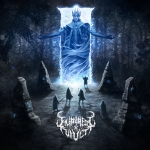 EMPYREAL VAULT, emerged from the technical Death Metal scene of Bordeaux, France and “Empyreal Vault”, their debut full length was recently released in co-operation with Great Dane Records. “Empyreal” meaning of the highest heavens and “Vault” a chamber typically hidden underground; like two worlds blended together, here they merged some tech Death influences with Deathcore and some progressive stuff in Ambient passages. Sharing common member of EXOCRINE, here they seek tight balance between intricate, rich, technical parts and the overall effectiveness of the songs. As for the music, the lead guitar work sets this album quite apart from a typical Deathcore record where good chug and insane arpeggios tapping on top of haunting synth patches. Additionally, there is a sound design aspect to EMPYREAL VAULT’s music by using specific effects at key moments, blended with the right synth patch in order to bring an imposing atmosphere. The coherent riffing from the tech Death world and the groovy one from the core world both well blended in this album. It’s clear, precise and without burrs. Then the growled song, powerful and deep, inevitably brings it closer to the brutal American Death school. Production-wise Sylvain (guitar) did really well and it fulfills some pretty high production standards and need to welcome its natural balance and total opposite of the ‘plastic’ standards that are raging in many of the contemporaries. The group is not overplayed in the technical aspect, preferring atmosphere of the best effect that blended perfectly to its malicious rhythm section. The result is evident, the big half hour that lasts “Empyreal Vault” passes like swift air and lays foundation for the repeated listening. Some judicious melodies (‘Nameless Evil’, ‘Forgotten Titan’) and discreet keyboard placed with precision make this first throw convincing. ‘The Rain’ gave a mood changer with an almost deafening sound effect of rain that drowns out more interesting textures. Sections led by clean tapped bass and synth pads in ‘Deathbringer’ work incredibly well. No doubt, performance wise this album should generally be applauded. All instruments are played near flawlessly, with stunning guitar work, and bass lines that never feel superfluous. Unfortunately, the drumming, whilst performed and mixed well, lacks any imagination whatsoever. This drummer seems obsessed with double kick pedals to the point of ridiculousness. This drumming has done nothing, but harm the strongest moments this record holds. Thankfully, enough of the stellar technical Death Metal riff writing on display here is allowed to justify recommending this record however. ‘The Ritual’ and ‘Forgotten Titan’ in particular is strongly proved that; EMPYREAL VAULT could make a name for themselves with the added dynamics and some tweaking in the whole mould. Explore more about the band at www.facebook.com/empyrealvault or visit the label at www.facebook.com/greatdanerecords.