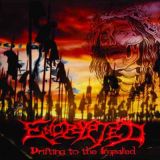 ENCRYPTED
Drifting To The Impaled
(Lord Of The Sick Recordings / Satanath Records)
20:50min

It seems that the old MORBID ANGEL recordings left their mark all over the world. The Puerto Rican ENCRYPTED have been doing hard in keeping their adoration for the gods and originators of Death Metal a secret. Maybe they didn’t even want to. The only release of the band from San Juan in nearly two decades of existence (that includes a long hiatus as well) was an EP with six tracks called “Drifting To The Impaled”, originally released in 2001. Since that EP was released on a very independent basis by the band itself, the songs were hard to get. But that has changed due to the dedication of the Russian label Lord Of The Sick Recordings, who re-released this underground gem last year. Well, the term “gem” might be a little overblown, but “Drifting To The Impaled” is an EP that should please any lover of good old fashioned Death Metal with a weakness for early MORBID ANGEL. And even though I mention that name petty often here, ENCRYPTED are by far no copycats. They mix in some Grind parts (TERRORIZER anyone?), some general influence from the US Death scene and even the one or other hint of Classic Metal as well. The brew thus served tastes delicious and has a charming underground sound as well. If you like your Death Metal old school and and raw, check ENCRYPTED out: www.facebook.com/encryptedonline, http://encryptedonline.bandcamp.com. If you want to order the EP, visit www.facebook.com/lordofthesickrecordings or http://lordofthesickrecordings.bandcamp.com