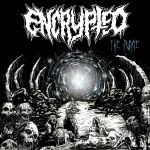 ENCRYPTED is a two-men project from North Rhine-Westphalia in Germany and active since 2012. After a demo release in 2013 they finally release their first 4-track EP in form of “The Purge” via the newly founded label Star Spawn Society. The result of their hard work is a quite cool old school Death Metal release. The band describes their style as a mixture of Scandinavian and US Death Metal and this is indeed a good description as they sound like a bastard of Scandinavian Death Metal in the vein of ABHORRENCE and DEMIGOD and US Death Metal bands like older DEATH or OBITUARY. Anyway their style sounds very matured and natural and it seems that the two guys finally have found their own special style in Death Metal. The opening track ‘Oppose’ is an up-tempo track with faster drumming, deep grunts and typical old school guitar lines. Especially the middle part also brings back some memories of an album called “Cause Of Death” but a bit quicker played here. The guys spread out a really cool old school vibe but manage to let this sound fresh and unused. The second track ‘Doomed’ also is a mid-tempo Death Metal track with slow, nearly doomed parts and slow paced guitars and drumming but effected very groovy before increasing the speed in the last part. ‘Era Of Nothingness’ is a really gorgeous track with a really cool melody in the beginning and spreads again pure 90s feelings. This kind of sound was the cause, why I fell in love with Death Metal back in 1994 and still sounds like this manage to enchant my ears nowadays. The last track ‘Order Of Purity’ also has this kind of OBITUARY vibe in the beginning but a lot quicker effected before changing to Scandinavian styled Death Metal. Also a very outstanding track. All in all, “The Purge” is a very well-done debut release for both, band and label and is definitely recommended for every underground lunatic out there. So do not hesitate and check out both via the following sites: www.facebook.com/encryptednrwdm, www.starspawnsociety.com