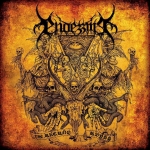 It’s a little assumptive and stereotypical to think all Black Metal that comes out of Norway is worthy of the history created by its founders. And for a band with only two EPs and one full-length prior to the new one, you might not expect the band to have grown to the high reaches we’ve come to expect. However, with their second full-length "The Arcane Abyss", ENDEZZMA have proven that time (from their inception in 2005) has strengthened this band, holding them to the standards of powerful Black Metal. This five-piece (Morten Shax – vocals, Mattis Malphas – guitars, Nihil – guitars, Aske – bass and Skriu – drums) will prove to newcomers in the field how to do things right. The opening intro features a voice barking to a ringside-seated crowd before blasting into ‘Malferno’, a thrumming, chomping malignance of chaotic proportions with a less mainstream WATAIN vocal feel. What better to suck the listener in than with a furious, charging maestrom of musical bliss. ‘The Arcane Abyss’ continues a similar tone of belting drums and in your face angst. ‘Gates Of Mephisto’, a sweltering hymn that swaggers into the room and ignores the low-lifes, blackens the soul not unlike a stampede of hell’s apostles. ‘Morbus Divina’ picks up the pace with lightning speed guitars and drums. ‘Sick Kulta Lucifer’ is another track that could fit nicely on "The Lawless Darkness" from Eric Danielson and company. And this isn’t a bad thing. It certainly picks up where that album should have left off before our friends in WATAIN prayed to the gods of money instead of the goat-hooved ruler of the underworld. ‘Serpent Earth’ simply kicks your teeth down your throat. ‘Esoterisk Mystagon’ sashays across the floor with a daring dance of triumph. This is a band that has no limits. The final track ‘A Grave So Deep’ finishes the album up nicely. This no-holds-barred album is an abundance of pure aggressive, yet melodic Black Metal that will leave you with a sense of satisfaction and exuberance, anticipating what the future holds for ENDEZZMA. For more information, check out www.facebook.com/endezzma, www.pulverised.net