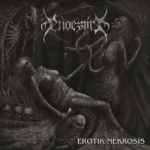 ENDEZZMA, a 4-piece Norwegian Black Metal band, continues the country’s strong traditions for creating some unique, first class Black Metal acts. Sorgar a.k.a. Morten Shax (also in BLOODSWORN) decided to reanimate his old project DIM NAGEL in 2005, changing the band’s name to ENDEZZMA later on. Prior to the band’s debut full-length studio album, "Erotik Nekrosis", ENDEZZMA recorded a 4-track EP titled "Alone", also for the Polish Agonia Records. What "Erotik Nekrosis" feeds us with, well, let me tell you this really ain’t your typical grim, dark and raw Norse sounding Black Metal but more like a modernized version of VENOM that ain’t afraid of using different things within their Black Metal. "Erotik Nekrosis" rocks. Yeah, that’s right. ENDEZZMA have adopted a sort of Black’n’Roll thing for themselves that they have put been effectively in use through their songs – and wrapping this rock-ish element up with very unusual disharmonious and odd techniques (at least for Black Metal) that all seem to make a perfect company to each other on this record. In a way, all of those tiny avantgard-esque elements that these Norwegian lads have brought into ENDEZZMA’s debut record, give a hint of two toward ARCTURUS’ debut album direction, "Aspera Hiems Symphonia" – not perhaps so directly, but let’s say ‘indirectly’ anyway. Also, what I really like about this album specially, are Morten Shax’s vocal lines that resembles Cronos’ of VENOM – oozing nastiness and very primitive rawness. As wholeness, "Erotik Nekrosis" is without a doubt one of the better and most intellectually composed Norwegian Black Metal releases that I have had a pleasure to become familiar with. Therefore I don’t have much else left but say in conclusion: very recommended. ENDEZZMA’s horde can be found at: www.facebook.com/endezzma, label: www.agoniarecords.com