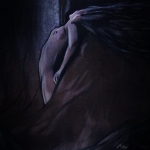 This German duo, that was formed in 2012, is presenting us their debut album, of mostly asphyxiating Doom / Black Metal with touches of military music and some riffs that are done trying to put the listener in a trance stage. Also the vocals sound more like a military order in desperation than the usual Black Metal shrieks. At times there’s quite traditional Black Metal riffs and parts, similar to what early BURZUM did, but with a better production. The use of some weird breaks like in ‘Das Hässliche – Der Mensch’ with some acoustic Rock like breaks are weird to say the least, and might as well kill the atmosphere created before. Then one song sounds like it could easily fit in a THE GATHERING album with any female singer. And then with the use of the thick German accent and some semi-industrial sounds they do remind of a certain RAMMSTEIN thing… yes, this artistic vision of darkness is quite different, it will surely appeal the more open-minded fans, or those looking for originality in such a limited genre… but at the end of the day it is just too much for me. More information at: www.facebook.com/allesistendlos, http://allesistendlos.bandcamp.com, www.narbentage.de, www.satanath.com