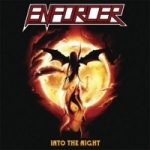 Proper, traditional Metal albums have been a rarity since the mid-90s at least. A shame, but a wrong that Sweden’s ENFORCER have set to right. This is an album veterans such as LIVING DEATH would be proud to have under their belts. For a group of such young men as these are to have an album like this as a debut is astounding, and a more-than-promising indicator of things to come. ENFORCER, it should be noted, has Adam Zaars on guitar, the same riff-master of the Uppsala based TRIBULATION. So, not only is ENFORCER an exceptional band, it contains members who have an impressive sense of all the genres. Metal like this is well suited to the club circuit and the arena. As luck would have it, ENFORCER are taking it there this Autumn, so we of the faithful need not worry. The Metal is coming. www.myspace.com/enforcerswe.