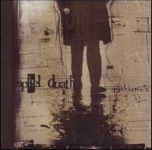 Whew! Crazy stuff from the mysty mountains (= EPHEL DUATH, from Tolkien) for Black Metal loonatics! This is EPHEL DUATH’s debut album ‘Phormula’ (including 2 remixes and 3 tracks from the demo sessions). For me their music is hard to follow because of the songs’ complexe structures (usually not that hard for me), strange synth sounds and unusual programming. Maybe I should invest even more time into this, but whenever I seem to get accustomed to a song, there are techno dance rhythms (or whatever) added and I REFUSE to listen to something like that! It’s short passages, so until I finally reached the eject button, at least the weird Black Metal is back. EPHEL DUATH’s music is very successful at MP3.com so I guess open minded EMPEROR or SUMMONING fans might actually like this. I just can’t see a connection between the misty mountains or Black Metal with dance beats, even though they’re added rather occasionally. Just imagine dwarf Gimli swinging his axe in a modern dance temple! Or is this idea what the band intended? It’s a pity because it’s spoiling a record that might have turned out to be a mind-blower!