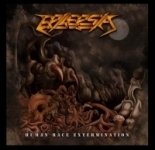 Peru is probably one of the few countries that back in the early 80s didn’t have a band as strong in name and reputation as some of some other South American countries, like Brazil, Chile or Colombia. Yet, there have always been great bands there like the mighty MORTEM (which in any case would be that band to represent this country as they started way back in the mid 80s but become better known decades later). EPILEPSIA was born back in 1992 and this is just their second album. Formed by ex members of bands like ANAL VOMIT and GOAT SEMEN, if you are already familiar with the names you will probably think of this in a similar style: brutish, morbid Death / Black with that South American touch. Probably the influence is there, but EPILEPSIA is in fact a lot more refined and controlled than any of those aforementioned bands. In this time and day, we can thank that technology has become cheaper and thus a good recording is in reach for any band. Well, this one has a very good production, quite clear with a very powerful drum- and guitar-sound. And the band shows that they are very capable performers. The main influence I would say goes for early SLAYER and early KREATOR, with galloping riffs and raspy vocals. There is a mixture of songs growled in Spanish and in English, but in this case and vocal style, there is really not so much of a difference at all in the input. And lyric wise they are also more akin to what early Thrash Metal was all about, where the album title is more than enough to give you an indication of what most of the songs deal with. After giving this album more than a few listenings, there are some very clever and well done riffs here and there that only experienced Metal warriors can create, thus making it very enjoyable. I would not say they play Thrash only, more like brutal Thrash or Deathrash, but played with a lot of class. Yes, there are also many riffs that will make you think they have been heard many times before, and at times, just a few times, some songs are a bit too much melodic or controlled for their own good, but still they keep that thrashy edge. In essence this band reminded me in style and execution to the very first THE MIST album or toe SEPULTURA from the "Arise" era. Some might find it too polished, while others might find it sounding similar in many songs. But give it a try; there are some memorable songs and riffs here of some fine South American Thrash Metal style. www.myspace.com/epilepsiathrash, www.myspace.com/australholocaustprods