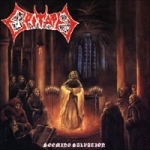 It’s time to fall on your knees again as it is classic time once more! EPITAPH’s one and only album “Seeming Salvation” got finally re-released these days including their songs from the legendary split LP with EXCRUCIATE. Who else than Singapore-based Konqueror Records could take care of this release? They already released the whole catalogue of EPITAPH’s partners in crime, EXCRUCIATE, on a double CD called “Beyond The Circle” in 2003 – long time before this new rise of old school bands started. What Frank and me (and probably 10 others) consider as a real Death Metal jewel was back at its first release in 1992 considered nothing else than a Death Metal album which was released probably a year too late. It includes all the clichés, like downtuned guitars, Sunlight sound and so on and at this time when Black Metal started to rise this was probably not that special anymore. But fuck what, this is a damned classic with 10 great songs (+ 4 additional ones from the mentioned split LP) in the typical Swedish tradition. If you are a supporter of Death Metal the Swedish way and this means if you count “Left Hand Path”, “Dark Recollection” or “Like An Ever Flowing Stream” to your all-time faves than this is, was and will always be one of those albums you will simply love. As I said, EPITAPH were just a tiny little bit too late and probably too many persons got bored of the Sunlight Sound. With a distance of more than 15 years now I still consider the Sunlight Sound as fucking awesome and trend-setting no matter what all these “experts” said back then. And this jewel here is a fine example of this. EPITAPH’s brand of Death Metal includes next to those similarities to the mentioned bands also a huge dose of Thrash Metal influences and again considering “Seeming Salvation” with the distance of 15 years I wouldn’t call EPITAPH a “Sunlight-clone” but a quite outstanding Swedish Death Metal band with a nevertheless typical Swedish Death Metal sound. The vocals simply sound how vocals only can sound in a Swedish band, the same for the guitars and the same for the songstructures. This is Swedish Death Metal – fuck yeah!! OK, enough of it! The strange thing is that EPITAPH’s split LP was one of my first underground experiences I bought, but I never bought the original version of “Seeming Salvation” (for those still not aware of it, Thrash Records from France originally released it back in the day) and I don’t know why. I just had it on tape quite fast after its release and I enjoyed it a lot. Perhaps I couldn’t get hold of it, I don’t know. Andy from Konqueror Records burned this CD and sent it to me about 2 years ago, not knowing back then that a re-release will happen in the future on his own label. Actually I think the original version is very rare those days, but this release is something like a wet dream for all those who missed this gem of Swedish Death Metal and also to those who finally want to have the songs of the split LP on CD, too. The layout itself is pretty good (unfortunately I can’t compare it with the original release), though what I miss are liner notes from the members or from some insider, more pictures and lovely details the fans are craving for. At the end it’s still the music which counts the most and here I can say: well done, Andy! Well done, members of EPITAPH. By the way, when talking about the members of EPITAPH: since more than one year I’m waiting for the answers to my interview-questions I sent to Johann (and lately also to the other members of EPITAPH) for an interview to appear in Voices From The Darkside. I know that you guys probably don’t benefit that much from such an interview and answering it may be a pain in the ass and will take a lot of time (I know that I prepared far too many questions, haha) but there are many persons who would be really interested in reading those answers! Guys, wake up please and respond to the interview. OK, nuff said now. Buy this CD immediately! It sells for US $16 (postpaid). Contact info@konqueror-records.com, www.myspace.com/konquerorrecords