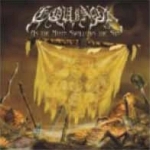 Another two years have passed since the release of “The Immortal Kind”, EQUINOX’s last 6 song mini CD, but it seems that nothing has really changed for this great Florida Deathers ever since, unfortunately… The band is still struggeling quite a bit to gain international recognition and once again ended up on some small underground label for the long overdue release of this compilation CD of their early works. I don’t really get it, to be perfectly honest with you… I mean, why do bigger labels tend to sign useless crap acts, side-projects and copycats all the time and on the other hand great bands like EQUINOX get ignored?! Ok, this unholy foursome probably made some wrong business decisions in the past (both their full length albums got released by Greek Unisound Records and Polish Still Dead Productions… do I need to say more?), but hey, that doesn’t necessarily mean that their music isn’t worth being checked out! In my opinion these guys haven’t actually really written a single bad tune throughout their entire career! If you don’t believe my words just order a copy of “As The Moon Swallows The Sun” to find out for yourselves. This CD features everything they recorded previous to their debut full length “Return To Mystery”. In detail that is their “Upon The Throne Of Eternity” EP from 1995, the “Promo ’94” (which also includes their great, very doomy and extremely heavy sounding version of the KISS classic ‘The Oath’), the “Anthem To The Moon” 1993 demo, three excellent cover songs by SLAYER (‘Haunting The Chapel’), BLACK SABBATH (‘Hole In The Sky’) and MERCYFUL FATE (‘Gypsy’) as well as two unprofessionally recorded (thus rather superflous) live tracks. I would have preferred to see their other cover tunes (MAIDEN, PRIEST…) on here instead. Musically EQUINOX has never been your typical Florida Death Metal act (technical and blasting), but a very heavy, often also quite doomy band (definitely closer to old ACHERON / MASSACRE), with Matt “Darkness” Wagner’s awesome vocals on top of it. He almost sounds like a blackened version of OBITUARY’s John Tardy (if you can imagine the result). Whenever they speed things up, they never play fast for fast’s sake, but because a song simply requires it and the result is a very diverse collection of songs, with a very occult overall atmosphere. The booklet features several old pics, liner notes from guitarist Pete Slate and a great coverart by Craig Simpson (USURPER, SATHANAS etc.). Buy or die! For more info check out www.myspace.com/equinoxmetal, www.grimnocturnalrecords.com