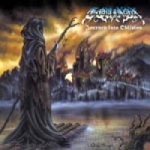 Due to a bunch of business related problems it took Florida’s EQUINOX quite a while to get this album out (the recordings were already finished way back in September 2002!), but now it’s finally here and the result is definitely worth the long wait! Still Dead Productions’ label owner Julius adviced me to listen to it a few times before I finally make up my mind about it… Well, I’ll tell you what – I do get advices like that almost every day, with each release we receive, but in the case of this album it really is nothing but the fuckin’ truth and no cheap marketing slogan in order to sell a poor product. EQUINOX is one of the most underrated acts ever to emerge out of sunny Florida and “Journey Into Oblivion” a musical roller coaster ride through about an hour of classic Heavy Black / Death Metal. Unlike the current trend to blast as fast as you can, EQUINOX took a different direction and perform their material mostly very midpaced, partly doomy and partly fast. And when I say fast, I don’t mean senseless snare bashing, but really cool and varied drumming with great doublebass parts. The dark and very heavy riffing often brings BLACK SABBATH to my mind, while the soloing is totally in the vintage SLAYER vein. The vocals sound totally possessed and are a mixture of Black and Death Metal, yet very impressive and charismatic. Yes, EQUINOX are totally old school, and that’s more than fine with me as they come up with songs full of interesting riffs and memorable parts – a fact which a lot of the current bands seem to have forgotten about. They just tune down their guitars, growl as guttural as possible and play 100mph through the course of an entire album. The EQUINOX guys luckily still know what a good song demands in order to stand the test of time, probably because their influences come from all those acts that are eternal to many of us nowadays (POSSESSED, CELTIC FROST, DESTRUCTION, SLAYER, BATHORY, SODOM, VENOM, NECROVORE etc.). And you can easily check out that they perfectly understood the old masters by listening to their great version of POSSESSED’s ‘Seance’, which closes this comeback album very impressively! Somehow EVIL INCARNATE’s album title “Blackest Hymns Of God’s Disgrace” is the perfect description of what EQUINOX are musically celebrating on here. So, if your musical horizon not necessarily ends with frognoise (like DISGORGE) on one hand and faceless highspeed Black Metal (like DARK FUNERAL) on the other, and if your faves includes likeminded acts such as THE CHASM, SADISTIC INTENT and so on, you should really make sure to pick up “Journey Into Oblivion”. But beware: you might get addicted after a couple of listens already! More info on the band in the interview which is about to follow soon!