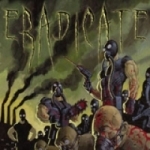 This band from Germany likes Death Metal from Florida, like DEICIDE and especially CANNIBAL CORPSE – from their first album “Eaten Back To Live” to “Vile”. The singer likes George Corpsegrinder alot, yes! Especially the screams sound veeery much alike (well copied I would say). The songs are well played and quite technical (of course not as technical as CANNIBAL CORPSE but I would never expect that from any other band!!!) but the riffs are too strongly inspired for my taste. Just listen to the tracks ‘Chamber Of Torture’ or ‘The Undead’ and you know what I am talking about. Their songwriting is quite straight, more DEICIDE than CANNIBAL CORPSE, but needs to be improved here and there. A good riff does not get better when it is played again and again and again and… Ok, that is not often the case but sometimes very obvious! The production is easily described as well: just imagine a powerful European version of the CANNIBAL CORPSE sound. Easy, isn’t it? Ok, ok, this is ERADICATE’s second album after their 2004 debut “Complete Eradication” so I shouldn’t compare them to a band that has been around for 10 albums too much… But there is some advise for the guys for their future: they should focus more on building up an own identity! Otherwise they will never step outside the shadow of CANNIBAL CORPSE! The quite nice and somehow original coverartwork is already a first step in the right direction! So much from me (I think I better don’t mention their heavy German-English in the lyrics for I don’t want anyone to check my reviews for grammar mistakes or worse!). Folks, if you are interested in a less technical but promising version of CANNIBAL CORPSE (this is the last time I name this band, I promise!) go for ERADICATE and check out their website: www.eradicate-deathmetal.de.