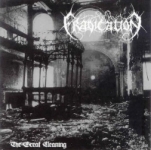 This side project featuring Kaiser W. (godly pseudonym!!!) of the controversial AD HOMINEM and Sad of the split up CANTUS BESTIAE is despite the dubious reputation of one of its members a very good, raw and traditional Black Metal album. Sometimes quite melancholic chord melodies and furiously thrashing elements melt with interesting misanthropic, hateful lyrics (which are not coquetting with right-wing or totalitarian views like Kaiser W. does in AD HOMINEM) and culminate in a rousing debut filled with old, early 90s Black Metal spirit, unpolished and uncompromising in every aspect. Production-wise there is nothing to complain about, there’s this typical thin guitar sound of French underground Black Metal and an honest, capturing rawness most fans of traditional Black Metal should succumb to instantly. “The Great Cleaning” offers no experiments, no innvoations, but it has this special unsophisticated feeling, the rousing simplicity and harsh sound of good Black Metal and at least I can not get enough of that… For additional infos: www.undercover-records.de