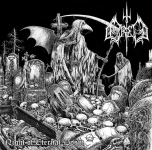 Blackened Death Metal is a genre that expanded a lot in the last 10 years due to some well known acts that took the genre to an “accessible” level (BEHEMOTH…), but there are still bands mixing these 2 genres to create an obscure and brutal assault of punishing music. Dark Descent, Pulverised, Blood Harvest, etc managed to release some great Black / Death Metal acts that deserve total support. And while the Death Metal and Black Metal purists might argue about the un-balance of mixing these genres the result is very unique when the band knows how to do it properly. Most of the time we all think about Finland, Norway, Central Europe and even the Unites States when someone mentions the term blackened Death Metal, well there are also other countries exporting awesome bands playing this hated / loved genre. Spain has a great tradition in Death Metal, in fact I think 90% of the bands I know from Spain are Death Metal bands and all of them are amazing, original and destructive in their own way such as the mighty AVULSED, MACHETAZO, GRAVEYARD, UNCONSECRATED, etc. But the good thing is that the scene is very active, and the members of those excellent bands have other projects to explore different genres and ways to create obscure music. The result can be heard in some outstanding projects such as BANISHED FROM INFERNO, INSULTERS, MORBID FLESH, BALMOG, etc., and one of the projects from Lorenzo (ex – GRAVEYARD, ex – UNCONSECRATED) is ERED. ERED started in the mid 90s releasing some demos until 2005 when the band released their debut album. Then, 5 years later the band released another full length album which was properly released via Grotesque Productions from Spain, and people started to pay attention to ERED. But the time from one release to another was a long waiting time and I started to wonder if ERED was still active a couple of years back. Then all of a sudden this year I saw a post from War Anthem Records saying that ERED were signed and about to release their 3rd full length album. To be honest, I wasn’t very excited because it took them 5 years to release it and was more like thinking it could be a “let’s see how it goes” album trying to get attention from the current scene. Then I listened to the record and feel shame for myself. “Night Of Eternal Doom” is probably the best record that Spain will put out this year (no offense), the atmosphere, sound and raw approach is something that I thought was lost in the Black / Death genre. I will try to explain what is going on here, this is something that NECROPHOBIC would have wanted to release since the late 90s, it is that damn good. The vocals are top notch and the drumming is something unique. It sounds like the drummer wanted to play mid-tempo hard hitting parts and just mix a bit of blasts giving that Black Metal sound, the guitars and bass play around with different structures and distortions, from a slight overdrive to aggressive tremolo riffing and even some clean parts full of melodies. I can’t stop telling myself this album sounds very close to NECROPHOBIC which is a great thing if you ask me. The cover artwork is brilliant, made by Juanjo Castellano, and displays all the obscurity and desolation trapped inside this record. So in a nutshell this album is a major hit, hoping for ERED to be known and make it to the next level. I promise these guys have the potential and this album is such a great example of what they can achieve. Go buy this record as soon as it gets released (in a few weeks), play it out loud and worship the goat endlessly, this is an obscure masterpiece. Get the album and updates here www.facebook.com/eredofficial, www.war-anthem.de