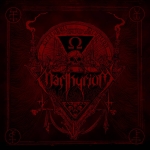 This split EP, released in 2013, by the Catalan based label Negra Nit Distro is still around and kicking, and if you haven’t checked it out yet, it is not too late, there should still be a few copies around, so get off the chair and get hold of one, if you like what you are about to read. "Psalms Of Plagues & Cult Of Death" is showcasing a track from each band, ERED a seasoned entity on the Spanish scene with a good deal of releases behind them, and MARTHYRIUM a newer band, the track on this split marks their third release. ERED is displaying a powerful song deeply rooted in the Scandinavian melodic Death / Black Metal scene, and especially DISSECTION is lurking under the surface, of the guitar melodies that powers the track, and once in a while screamer Abyssal hits it off close to Jon Nödtveid (RIP) with his vocals, quite well done to be honest. ‘Wings Of Plague (The Black Spreading)’ is a well written and performed song, with a hell of a drawing atmosphere, that grips you from the start and holds you in tight shackles throughout the 5:38 minutes it lasts. The ties to DISSECTION, THRONE OF AHAZ, NAGLFAR and the likes are huge, but ERED still stands on their own, as they do twist it a bit, more of such please. The other band MARTHYRIUM is going a more pure Black Metal way, mostly reminiscent of late nineties American hordes, and done quite well. The track is a tad repetitive, though for a song that lasts 7 minutes, it is actually quite well composed, and it channels a good deal of energy and drive our way. The thrashy guitar sound and riffing does good for the intensity and energy, as such a band that could turn quite good, judging from ‘Deathkvlt Devotion’. There is some chaos and aggressivity in the music, and the raw slighty chaotic production is working in this context, together with the heavily reverbed scream. A nice little EP with two exciting bands from Spain, that I think is worth following in the future, and to take a look back at as well, as they’ve released a bit, especially ERED, which also are ready with their third full length "Night Of Eternal Doom" on War Anthem Records, more or less right about now. I think I have to get hold of that one, and give it a spin or two! www.marthyrium.com, http://marthyrium.bandcamp.com/album/psalms-of-plagues-cult-of-death, www.facebook.com/pages/ered/103502109714223, http://negranit.paura.cat