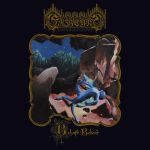 The band was formed in 2020 by one man that takes care of everything. In 2022 two albums are released in a similar style of traditional Black Metal, recalling the heroes of Norway in the 90s, yet with a few touches of Folk and Epic sounds, thus giving it a very personal sound. Add to that a great production and execution and we have a winner. In this album, which is not that different from the other release the same year, I can feel a sound more like ENSLAVED, with the obvious BATHORY references and I can hear a few things recalling bands like MASTER’S HAMMER. The use of keyboards and some effects are done with the right amount, thus adding more to the sound of the band. And there is always a sense of melody, that type of spectral and almost dungeon invoking type, that fits the music in such an evil, perfect way. Also at times, even using some more classic Black Metal vocals, there is also some melody in them, which I only heard in later MARDUK and when done properly, can add a lot to a song. Although everything is cast as a spell in the German language, they do have very sinister devil-worshiping themes, as well as chaos and despair. I can also feel in their music a link with the primordial powers of nature as in ‘Locvs Infestvs’. A killer release, which of the two they have just done this is a bit more atmospheric, but it gives traditional Black Metal an update with great sound, yet never betraying the roots of the style. And such a great guitar sound for Black Metal they have achieved. For fans of the style a must, and for any Metal fan something to pay attention to. https://erzfeynd.bandcamp.com, www.facebook.com/vanrecs