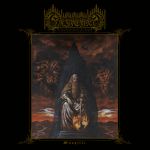 Formed back in 2020, this one man Black Metal band is releasing not one but two albums as their debut full lenghts. The name of the band is translated as arch enemy, but there is nothing in common with the band that uses the English name. This is Black Metal, that sometimes reminds of the more minimalistic bands of the style, maybe something related to early BURZUM, DARKTHRONE and IMMORTAL, yet with a sound that is their own. It has a lot of melodies in there, sometimes a Folk – like sound and aura without being a Folk band. The use of some keyboards here and there, some clean chorus vocals and basic, but well done main riffs, and all of this with a very good production makes this a very interesting entry for those looking for a traditional form of Black Metal. It retains that aura of the early 90s, but not only copies it, it adds a more evolved form of the sound. I always wondered what all those early raw Black Metal recordings would sound like, if played in a better way and actually having a good production, and this is literally a good representation of what it would be. At the same time the dark and evil aura is never lost, the guitars are heavy, yet retain that high pitched disturbing sound and the classic Black Metal voice, which by the way reminded me a lot of Okkulto and also sometimes the overall sound is similar to older DESASTER. Even if I told you about being quite simple in style, the band is able to create and compose in a way that it all sounds interesting, while keeping that basic sound. ‘Perchtentanz’ is a killer song, which showcases a great creativity, using basic riffs here and there, yet creating a haunting atmosphere. And the fact that the guitar sound is heavy and distorted but keeps the grimness there, is just such a great way to express traditional Black Metal for the new generations. Obviously the lyrics are in German and deal with darkness, satanism and the apocalypse. This is the record that keeps you going back again to it and every time something new appears… like black magic arise! Great album. https://erzfeynd.bandcamp.com, www.facebook.com/vanrecs