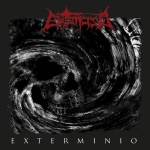 EUTANASIA are hailing from Santiago de Chile and are active since nearly three decades. Their first and only full-length “Exterminio“ from 2007, which was self-released back then, finally gets a proper re-release via Iron, Blood And Death Corporation. The guys from Santiago are pretty much influenced by the late 80s / early 90s Death Metal scene from Florida and play good old Death Metal in the vein of CANNIBAL CORPSE, MALEVOLENT CREATION or old DEICIDE. Being active since 1990, it is no wonder that their first full-length is offering good and matured material and for a self-released album, this one is definitely offering pretty good Death Metal with a dirty touch. Good drumming, combined with sharp riffing and pretty good grunts. The eight recorded tracks are all above average and pretty enoyable. Surely, the influence especially from Florida’s Cannibals are more than obvious but I am sure Corpsegrinder and his friends would have liked to include one of these tracks on one of their albums. Also worth to mention is the good bass work and the audible bass-lines. It has been a while now since I listened to stuff from Florida and EUTANASIA definitely remind me that it is time to check some of the classic albums again. The eight tracks are diverting and no filler is included here. The re-release also includes the two tracks of their “Promo 2017” which show a slower side and sound, a bit more influenced by the European 90s Death Metal. Good material but only for fans of old and rough material, which is not overproduced and polished as fuck. For more info check one of the following sources or grab one of the CDs, limited to 300 pieces. https://eutanasia-dm.bandcamp.com, www.facebook.com/ibdc666