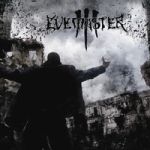 It’s been like 5 years or something since Finland’s EVEMASTER’s previous studio outing, "MMIV Lacrimae Mundi", reached a few pairs of ears of the extreme underground Metal community. Nobody believed we would hear from EVEMASTER any more after that particular record in question but gladly some things are destined to break a long period of silence – just like EVEMASTER do with their latest, 3rd album very aptly titled "III". EVEMASTER’s core unit, the Mykkäne-Taskula duo, has always been the powerhouse behind EVERMASTER that has determined the musical direction for the band, only hiring some guest musicians to add the remaining pieces into the recordings of each of their release through the entire history of the band. That stratagem has worked out for them just fine – and they haven’t made an exception this time either: Ville Sorvali (MOONSORROW) on bass, Markus Vanhala (INSOMNIUM, OMNIUM GATHERUM, etc.) on guitar, Dan Swanö (guess everyone already knows this guy’s numerous projects / bands in the Metal scene) on some clean vocal parts – without overlooking a bit Ismo Monola’s (keyboards) and Enrico Annus’ (drums) inputs on this album, they all have made it possible to make EVEMASTER’s 3rd opus their best and clearly most mature sounding effort thus far. It’s kinda hard to put EVEMASTER’s music under some certain or specific musical category really as they have quite a lot of different elements from other Metal genres absorbed into this opus. Perhaps melodic and progressive Dark Metal would do at least some justice to describe EVEMASTER’s sound on "III", so let’s go with that one. As wholeness, "III" isn’t that easy to digest either due to reaching so many musical levels and different layers when it strictly comes down to this certain type of appealing trickiness of their stuff. EVEMASTER trust as much straightforward, aggressive and at times somewhat an even brutal approach on "III" as much as they also do pay attention to a sort of constant yet easy flow of their material – challenging themselves quite a bit while the songs naturally tend to progress on: i.e. churning out pretty darn unorthodox and tricky song arrangements, then wrapping them up with nice, catchy melodies and mind-sticking hooks – and using quite a lot of effort to obtain these essentially deep yet airy atmospheres behind their songs as well. Somehow they have managed to make it work for them and the sheer satisfaction and entertainment factor is hence pretty much fulfilled by all this masterful work. More EVEMASTER at: www.evemaster.net, label: www.facebook.com/supernovarecords