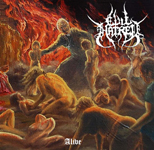 This is a demo by the new band of several ex-members of Chile’s THY SERPENT’S CULT, a band that called it a day in 2017, after three full-length albums. And this, indeed, follows the legacy of their previous incarnation, as it is very direct and brutal old school Death Metal. From these three tracks that add up to little more than ten minutes, and in a live recording to make matters worse, it is not so easy to judge the true potential of this band, but in spite of the somewhat lacking sound quality, it is obvious from these three songs that we are in the presence of total old Death Metal worshippers, with pounding, technical drums, razor sharp riffs and solos and a voice that echoes up from the bowels of Hell. If you like that brutal and savage feel that is so prevalent in South American bands, and if you are an enthusiast of the times when bands like MASSACRE or DEICIDE were showing the world how to do insanely brutal music, you are certainly more than likely to enjoy this. From the information I have this demo will be soon released on CD, and apparently a tape edition is also being considered. So while we wait for material recorded in a proper studio, you might as well check this out by inquiring at the following e-mail address: hatredyou@gmail.com.