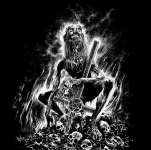 Two extreme Japanese bands are gathered on this new split album from Obliteration Records. Both bands are extreme in their own way. The first one are EVIL which is a Black / Thrash horde from Tokyo. These four evil warriors are able to capture perfectly the ancient feeling of the first wave of Black / Thrash Metal in the early / mid 80s when bands like VENOM, SODOM, SABBAT (JP), BATHORY or SARCOFAGO ruled supreme. Don’t expect some inovative or exceptional technical stuff here. These lads deliver you a brand of filthy and aggressive music, always violent and intense as possible. They neither take any prisoners nor do they make any lame compromises. Pure, honest fucking (blackened) Thrash Metal is the law – and that’s great. Their songs are catchy, simple and straight into your face. If you are a worshipper of the aforementioned killer squadrons then this stuff will drive you a diabolical grin in your face. The perfect soundtrack for an extensive headbanging session. To pay tribute to one of their most influential bands EVIL pukes out a crushing version of SODOM’s ‘Witching Metal’. The sound quality of their seven tunes (incl. one intro) is ok. It’s filthy and raw but no garage sound and very well audible. In case you like the style these four Metal samurais have to offer you should immediately check out their 2nd demo as well where you get a total of 14 intense tracks in the same style than on this split album. All sung in Japanese of course. The second band on this little silver disc is LURKING FEAR. Musically they have nothing in common with EVIL as this Nippon trio delivers a kind of brutal down tuned Death / Grind stuff. They also throw seven tracks into the battle incl. a cover version of ‘Helga (Lost Her Head)’ by the legendary REPULSION. The sound of their tunes is heavier and more brutal – that’s the shit what you expect from a band in this genre. Like usual the vokills are puked out in a gory way with some insane shrieks. The guitar sound is fat, shreds and will shave your head. I don’t have any further info about them but it seems that these guys don’t take themselves too serious, at least as far as the lyrics are concerned. That’s just my conclusion when I read song titles like ‘Gore Budda’ or ‘Space Satan Suicide 666’. As you might expect there’s the typical split CD syndrome here. Like with many releases of this format there’s the light and shadow factor and mostly both bands aren’t on a par with each other. But that is like usual just a matter of taste. My personal winner and favourite of this split album are EVIL (even LURKING FEAR are ok as well) as they are a cool wild thrashing horde at the edge of madness. For all further info on this release check out www.facebook.com/evil.thrash.japan, http://lurkingfear1.bandcamp.com, www.obliteration.jp