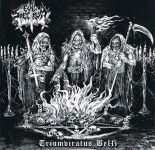 Peru and South America has a long running tradition of extreme Metal bands who sound raw, primitive and crude. Lima based EVIL SPECTRUM keep up that tradition and unleash a savage deathly blackened thrashing onslaught upon the senses with this their 2nd EP. These Peruvians churn out a sound full of sharp scything riffing, ripping leads, bellowing deep growls which are swathed in reverb and sound like some evil entity that has been conjured up from the depths of some abyssic hell and bass and drums that furiously and relentlessy bulldoze through the chaos and dirt. It is an infernal melting pot of unpolished bestial blasphemy that will appeal to any fan of old school 80s and early 90s Death Metal and Black / Thrash Metal and is bolstered by a simplistic and straight forward approach to their execution and songwriting which just adds to the intensity creating a very volatile aural attack. Production wise it is suitably basic and brash, sharp but scathing and ultimately savagely sadistic in its intent, the drums are chaotically clattering, with a snare sounding like a jackhammer that is stuck on maximum speed, the tempos throughout are mostly on the faster scale of things although they do reign things in from time to time albeit briefly and slow the pace down ever so slightly before bursting back into another section of bestial barbaric brutality. It will be interesting to hear what they can conjure up for a full length album, but in the meantime check out this near 20 minutes of hellish evil thrashing Death / Black Metal from this possessed Peruvian horde. http://evilspectrum.bandcamp.com, warkultfront@hotmail.com