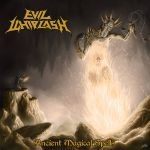 Vudú Revolution. At first, you may consider this as something that can be explained as a revolt by Voodoo or some type of ritualistic way to practice and learn the art of Voodoo and its implication to conjure or possess or to fight spirits, for noble or evil purpose. However, it’s no wonder, the Colombians of EVIL WHIPLASH, praise and practice this art of rebellion with wicked determination, only to possess souls with spirits and energies from beyond. And, this is what “Ancient Magic Spells” is all about, the third full length from EVIL WHIPLASH, since its commencement in 2008, from the very depth of South America. As along the below fifty minutes passage of “Ancient Magic Spells”, the experience of practicing thus spreading mysterious magic spells will be evident, which might have evoked on their landscapes in ancient times and the Colombian trio, someway received those magic and spells, and conveyed that with their very own form of crust heavy and evilest Speed / Thrash Metal, in quintessential and forever enticing, energetic and spirited South American style. And spells named ‘Primordial Destroyer’, ‘Mystery Of Fire’, ‘Lord Of Dead’, ‘Vudú Insurrection’, ‘Predatory Spirit’, and ‘Necromancia’, are created in such a spirited way that, any typical trying of expressing like – they sound like those bands or which types of followers needs to explore this, absolutely makes no sense. The whole record made to experience by oneself and have their individual interpretation. The puzzling artwork may give the initial essence of what it beholds, but to ensure this reaches out to those who feel its invocation and want to explore solely, Iron, Blood And Death Corporation from Mexico now released “Ancient Magic Spells” in CD format. Those who will be exposed, may found themselves possessed by EVIL WHIPLASH and drawn to explore, how they initiated in their debut demo “Under The Sign Of Evil”, followed by the debut full length “Rituals Of Punishment” and continued with “Beyond Dimensions” towards “Ancient Magic Spells”. www.facebook.com/evilwhiplash, www.facebook.com/ibdc666