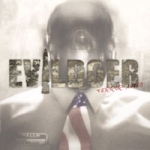 Hearing the name EVILDOER for the first time I thought what a great name for a Metal band! Why did the Metal community have to wait for a band with such a name until 2004? That is the year when some Swedish maniacs got together and started EVILDOER. They just released one demo and now attack with their debut album. And what an attack! The album is called “Terror Audio”, need I say more? I guess my neighbour’s ears are still bleeding! Most aggressive Thrash / Death Metal, played very fast, at some parts even faster than fast, but as well slow parts, where you can breathe and prepare for the next strike. Really great modern Thrash Metal, unbelievable riffing, sometimes even with a melodic touch, but that only makes the brutal parts sound even more brutal. The vocals are varied from slow growling to aggressive screaming, not that boring one tone singing like so many other Thrash Metal bands. And the sound? Well, even if it would be bad, one should regard this as a killer release, but the sound is very impressive. Clear, transparent, powerful and really brilliant. Sadly I have no information about the members, but they must be active musicians for years, regarding that it took only one year to record such a killer album. Bands like THE HAUNTED or DEFLESHED (both for me the top modern Thrash Metal bands) now have a serious rival. Release was proposed for August 29, 2005, but got cancelled due to business problems. Next one is scheduled for October ’05, now with worldwide distribution, so that the whole globe can go crazy about this masterpiece of modern Thrash Metal. www.evildoer.se