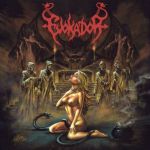 Guatemala’s Black / Thrash outfit EVOKADOR, since 2015, have released three demos and two EPs, the most recent being a six-song, self-titled abundance of messy, furious, blasting Metal to scald the senses. Renan Guerra (vocals), Jose Santos (guitars, bass) and Estuardo Franco (drums), though not a tight band by any means (and who wants ‘tight’ in barbaric Metal anyway), seem to pummel away at a sonic capacity that’s both sloppy and solid at the same time. The first track ‘Evokador’ begins with a throat-curdling vocal intro before heralding in a loud, instrumental offering that sounds like maybe the band hasn’t actually practiced enough, including the guitar solo. However, ‘Rito De Lunallena’ straightens itself up with a filthy, in-your-face delivery with raspy vocals and thrashy guitars. ‘Poseido’, with its lurching, chugging guitars, sprint forward as the drums attempt to keep pace. The great thing about Central and South American countries is their ferocity and ‘fuck it’ attitude, which creates a pulsing, primitive sound unlike any other. While Scandinavian countries tend to capture the cold, harrowing atmosphere surrounding them, Guatemala’s EVOKADOR keep the heat intense and sweltering. ‘La Ultima Trompeta’ is more thrashy goodness that makes you feel like you’re in a tiny, sweat-infused club standing directly in front of the band as the vocalist’s spit splashes against your face while he screams into the mike. ‘Hecatombe’ rolls at a vibrant pace with no chance to come up for air. And the last track ‘Camino Al Infierno’ closes out the set in a whirlwind of a track. EVOKADOR won’t set any records for instrument brilliance or ever-changing epic tunes. But who the hell wants that anyway? They destroy us with their wall of dizzying, ear-splitting sound and we inhale it willingly. For more information, check out https://evokador.bandcamp.com