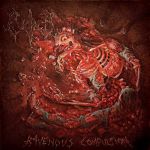 EVOKED, a German Death Metal outfit, had released a demo, a split and an EP so far before "Ravenous Compulsion", their debut album. Now, style wise, this album has its foundation in NWOSDM. As in everything in life, this fact has its pros and cons. This sub genre has been used and abused, successfully and unsuccessfully, by countless bands. So, originality is not one of their traits. Now, after all these years, it is really difficult to come up with something original and fresh. So, basically, the band has to infuse their music with enough distinct features to set them apart from all the others. And EVOKED has done just that. Their sound is familiar and the songs flow nicely as the album progresses. The vocals, courtesy of Simon "Siff" Wind, are raw, taking you straight back to the early 90s. And by that I mean, demo era of some of the classic bands from Sweden and Germany. I absolutely dig his work there. McBreu and Felix (drums and bass respectively) provide a solid rhythm section. The bass guitar is present in the mix, although following the guitar in most cases. Felix’s sound is modern, yet it has the "classic" bottom end that (I think) is so important in this style of Metal. McBreu’s drum work is great. His performance never looses a bit from Simon’s riffing; his breaks and cymbal accents add a lot to each song. Smart enough, these guys mix in really interesting slow parts just to enhance the faster passages. Music wise, "Ravenous Compulsion" is based on mid-paced ultra heavy Death Metal. The production is huge but also has a lot of dynamics. The mix lets each instrument to shine through, without taking back from the huge wall of sound that it relies on for a total sonic annihilation so characteristic of German Death Metal bands. EVOKED is not re-inventing Death Metal. What they have done is a heavy and dense album that any Death Metal fan will enjoy. What really surprised me is that even though this is their first proper full length, it showcases them as a mature band. I look forward to their next material, since there is a lot of room to develop into something even better. Follow the band at www.facebook.com/evokedbydeath and get their album here: www.fda-records.com