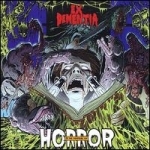 Finally, something other than Metalcore comes out of New Jersey! These guys are influenced by Repulsion and Blood Freak with their brand of sleazy Grindcore with a sound even heavier and faster! ‘The Buzz Is Back’ is a sickening slew of savage speed with a dialogue sample from "The Texas Chainsaw Massacre II". The nightmare continues with ‘Subway Savages’, a plethoric pounding of pulsing putridity. Three more tracks including a cover of S.O.D.’s ‘Kill Yourself’ round out the disc (2 live tracks are tacked on at the end and though they kill live, the sound leaves a lot to be desired). I’m always a sucker for dual vocalists in Metal; one raw screaming, one Nathan Explosion Death Metal growl. These guys kick ass so hard, I thought there were at least 4 members but there are only 3 guys making this beautifully unholy racket! The thick sound is also helped by some great production values. I know this is their 3rd disc in 3 years which is hard work, but I wish this disc had been longer. Hopefully, though, it should pique your curiosity and have you buying all their stuff shortly. These guys also cover themselves in fake blood live à la Impaled. What more could a Metalhead ask for? These guys are doing a US East Coast tour in March and need your help booking gigs. Check out www.myspace.com/exdementia and www.exdementia.net for more info!