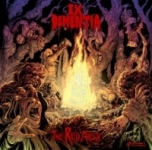 EX DEMENTIA, among a handful of other select bands from the United States, have never failed to craft convincing music. Though still young, they can boast to much greater achievements than many bands who predate them. It seems but yesterday that their first album, “Thou Shall Repulse”, was released in 2007. But, thanks to the wily ways of human perception, “The Red Mass” has arrived in a furious hurry. Continuing where the last album left off, “The Red Mass” is a thrilling album steeped in B-grade horror movies. Increasingly, more and more bands have elected to play with movies in mind, but the tendency amongst fans is still to think of MORTICIAN when horror movies are brought up in conjunction with Metal. But thanks to bands such as all those signed to Razorback, and EX DEMENTIA, MORTICIAN may have to start looking over their shoulders. EX DEMENTIA’s new album is fast, horrible, rotten, and putrescent. But most of all, it’s thematized with all the lovely fixings from your favorite movies. www.exdementia.net