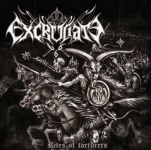 "Rites Of Torturers" is the second album of the French Black Metallers EXCRUCIATE 666. A band that has been active since 1994 with a decent discography, already spreading three demos: "Cutters Up Of Carcass" (1996), "And Die In Listening… Dark Symphonies" (1997) and "Warblood" (2001). Four splits: one with PHOBOS in 2003, one with WARAGE in 2005 called "Guerriers Nordistes", one with SOVEREIGN in 2009 and one ("Obscene Perversion In Genocide / Goat Ass") with DAWN OF CRUCIFIXION. Also a compilation in 2006, covering their 2001 demo "Warblood" and two tracks from the split releases. In 2010 they released their debut "Riding Fires Of Hate" on Infernal Kommando Records. In all those years they have stuck to their guns performing blasting War / Black Metal in the tradition of IMPIETY, MARDUK, ENTHRONED and the likes. Mongraven’s voice sounds like a mix of Lord Sabathan and Proscriptor. The opening track ‘The Awakening Of The Tyrant’ immediately reminded of the late ’90s when Black Metal was the big thing happening. It’s nice to hear for a change and something that has gained the band quite a following already. Eight tracks with a running time of over just half an hour that follow the old school path of the Swedish Black Metal. Instead of significant creativity, originality or quality you’ll get extremity. And that doesn’t mean this album sucks… although the production could have been better as have been on previous releases. I guess that wraps it up for this one. For contact, visit www.facebook.com/pages/excruciate-666/179734415441271 or www.ibdclabel666.bigcartel.com.