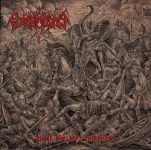 “Antic Warlords Supremacy” is French Black Metal outfit’s EXCRUCIATE 666 fourth album. They have also released 3 demos, 4 splits and a compilation since their inception back in 1994. First off, the production is dense and heavy, something atypical given their style, which shows a lot of influences from the second generation of Black Metal. The sharp tremolo guitar riffs courtesy of Blasphemort and O.B.X. are intricate and aggressive, yet melodic to a certain point. Joholocaust’s drum work incorporates lots of blast beats, interesting fills and good double bass. Sometimes he struggles a little bit with the slow parts, but these are few and far between, keeping up with the full speed attack for most of the songs. Morgraven’s raspy high pitched vocals are a trademark to this kind of music and a little one dimensional to my liking, but his phrasing is right on point. His performance on bass guitar is tight and creates the perfect bridge between guitar and drums. I really liked how the mix highlights the bass (that tone is simply devastating) since the guitars and the drums are really present. The vocals are a bit pushed back, which reminded me of some of, dare I say, classic 90s Black Metal bands. This is not a surprise since they started as a band right after the Black Metal boom of that era. EXCRUCIATE 666 are not bringing anything new to the table. But their conviction and compromise with this style of extreme Metal makes “Antic Warlords Supremacy” a solid Black Metal album with a really good overall sound full of mystery and an definitely evil atmosphere. Fans of second (and maybe) third generation Black Metal should be all over this, but the album offers enough variation to be enjoyed by any extreme Metal listener out there. Contact the band at www.facebook.com/excruciate666 and get their album from their label www.facebook.com/ibdc666