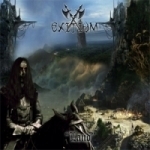 You all know those days, when you try to say something nice about something you can’t find any nice words for? I had a day like this when I first heard this CD. EXITIUM is another one-man-project, from Poland this time, describing their style as "symphony black metal" (sic). Sounds boring at a first look? I wish it would have been boring. But "Land", their second album after "Odium" (also from 2012) is not boring – it’s annoying! The main thing you hear are the guitars, which sound like my electric razor with less melodies. And this noise nearly masks everything else, except for the extremely distorted vocals. Sometimes you can hear some programmed drums as well, that don’t disturb too much… But when the guitars fall quiet, we have to stand the sound of the keyboards. Cheap wannabe "The Lord Of The Rings" – sounds, cheesy and bugging. So, we have: badly recorded stuff and mixing done by a half-deaf and annoying electronics. In other words: one of the worst records ever. I don’t know how I managed to listen to the whole album without drugs. Sorry to say that, but in times like these, where modern electronics and the internet enables everybody to record and distribute music, it is inevitable that somebody releases bullshit. If you are a masochist, check: www.exitium.pl