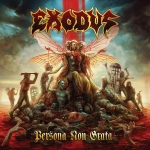 A fabulous disaster bonded by blood! Baloff is the man, no doubt about that, he toiled the microphone when I first laid ears upon EXODUS, and to be honest, I wasn’t a big fan when Zetro took over. Though he grew over the years, as the music didn’t regress. You can’t take away the status of Holt and Hunolt as great riff makers! Then EXODUS disbanded, and got back together again with Baloff, though that didn’t go much further than some touring. Enter Rob Dukes, a vocal style I never settled with in this context, when he was best he sounded like a Hardcore and very furious version of Zetro, though he was quite one-dimensional, and that can’t be said of the thrashing madness of EXODUS. To be honest, I hadn’t noticed Zetro getting back in the band. I had a quick listen to “Blood In Blood Out”, though that album didn’t latch onto me, and the vocals didn’t tear up my mind. The album seems a tad too long and forced, a force of habit one might say, there is no real pleasure of the flesh or good friendly violent fun interlaced into the tracks. Though it seems like the long time away from the studio, Gary Holt’s long touring stint with SLAYER, Lee Altus coming real into the band, even though he’s been with the band for 17 years – have revitalized EXODUS and given them the good old hellishness back – and when EXODUS writes music in that mood, impact is imminent. The riffing on the album hits you like a shovel headed kill machine and the pace is the tempo of the damned, damn the guys are energetic on this album, it seems like Holt and Hunting had one agenda, when they started this mission. Let there be blood and then they shred away, like in the good old days – that said there are many moments taking us back to the first couple of albums, I like it! It is incredible how two seasoned veterans of the Thrash Metal scene as Gary Holt and Tom Hunting can set up an album as fresh sounding as “Persona Non Grata”, especially after having sounded a tad tired the last decade or two. This is a good showcase that we all must develop along the road, though perhaps not all progression is good, perhaps it is when it’s going on. Though in the long run, we might be best off settling at what we do best and like the most, exhibit B: The human condition plays a big part here. Production-wise we have also gone back in time – a much more organic and alive production. The guitar tones are in total sync and have the same crunch as back in the good old days, most of the time at least. There isn’t much time for shenanigans, though most of the time the album sounds like EXODUS, and not a thrashy Hardcore band as it has happened a few times. Aggressive guitar tones, defined yet loose drum sounds, just have an ear on those airy toms and airy hi-hats, the bass is present and evil and the vocals so good damn in your face, together with the guitar. If these words about the immense intensity and the sheer joy of playing good old school Bay Area Thrash Metal as EXODUS showcases on this album, doesn’t convince you. Take a look at the video the band did, when making and recording the album – if their energy and attitudes in that video doesn’t convince you about this is the real deal once again – I don’t know what will, the lads are once again bonded by blood, this is another lesson in violence. And then there were none…: www.exodusattack.com, www.facebook.com/exodusattack, www.nuclearblast.de