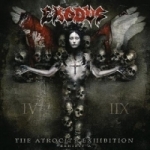 Falling in line with those VFTD staff who aren’t necessarily behind the new version of EXODUS, I can testify that for the most part I do understand where they are speaking from and sit amongst those of my brethren here (Laurent Ramadier / Timothy Dovgy) with a similar raised middle finger in protest and a dissatisfied nod of disapproval for this band’s newer efforts “War Is My Shepherd ” and “Tempo Of The Damned “. I can also say with total vehemence that I also agree with the editor here on his opinion of EXODUS’ last uninspired long player “Shovel Headed Kill Machine” as being surprisingly but-without-question, overtly weak, statuesquely boring in terms of actual songwriting and altogether as an album ultimately forgettable, especially within context to EXODUS’ notable and highly regarded past and prior discography. So where are we then today with this record “The Atrocity Exhibition – Exhibit A” you ask? I hate it. Every point made by Laurent Ramadier and Timothy Dovgy for the supposed revamped EXODUS just ring true, and hit home note after note, yet once more on this latest album. The resounding issue with this band is the simple and straight out fact that Gary Holt can not or will not take EXODUS to that long awaited and anticipated next level for yet another year and yet another LP. Add to this equation another failing Mall-core attempt made by the faceless vocalist, Rob Dukes, and before us sits just a little better record than “Shovel…” but not by much. And I am saying this without the obvious bias of this LPs speed. As anyone can hear for themselves that the bulk of “The Atrocity…” is for sure a faster album than their prior attempt. But seriously, what can speed do for a band when quality, the most important factor a band can have, is sadly lacking? On the surface the argument could be made that this record is karma, again, and what Gary gets for kicking Rick Hunolt out and replacing him with Lee Altus from HEATHEN. The same could also be said and the argument made for drummer Tom Hunting’s unprovoked expulsion and now sudden reenlistment. However, with the well known clenched fisted grip that Gary keeps on EXODUS and the fact that he’s kicked out every band member EXODUS has ever had at one point in time or another. The real reason that EXODUS have not achieved what their devoted fans glaringly see as the territory the band surely ought to have had conquered by now and assuredly why EXODUS have not crested that attainable plateau of might, rests solely in the reins of Gary Holt, and until he faces up to the fact that he’s had his chance and blown it for the third time in a row. The burning question that keeps flashing in my mind, and in the minds of my brothers of critique and fans alike I’m sure… is this the time when I should stop caring about what EXODUS brings to the table? Contact: www.exodusattack.com.