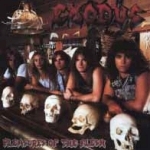 After the monumental "Bonded By Blood" there was A LOT of expectation to hear new material from the band. A demo was circulating with 3 songs, showcasing some new compositions the band has done. But my initial emotion was exactly the same I had when I had the album in my hands… in a way I was expecting this… some warriors after giving the fight of their lives, loose so many blood that a new battle will be hardly to be fought in the same level… and so it happened here. The success and creativity level the band achieved with "Bonded By Blood" was probably too much to handle. It paid its toll on the band… and the first sign of the decline was the departure of Paul Baloff. He, who was responsible of giving Metal a lesson in violence, by delivering a sick vocal style so far not heard as it, decided to leave the band. A replacement was to be found in the person of Steve "Zetrodus" Souza from the band LEGACY (later known as TESTAMENT). Whereas Paul was a screamy angry type of vocalist, Zetrodus was more a singer, with a very distinctive nasal-tone most of the time, giving him an identity, he was also less aggressive than his predecessor. So far, it was a thing of getting used to him. Let’s not forget that also a BIG part of the music was the formidable riff-o-rama invoked by Gary Holt and Rick Hunolt. Also Rob Mackillop is providing a great bass performance, and here we have a vast superior drum performance by Tom Hunting. With al these ingredients we are supposed to have a great album. The production is also better than their debut album, more present guitars and a clearer sound. But, but… damn, even as I wanted to like this one, I am confused and find it a lot less enjoyable. The problem? They decided to PLAY SAFE! Although there are some really aggressive songs like ‘Parasite’, ‘Chemi-Kill’ and ‘Seed Of Hate’, some are more controlled and has a more let’s say "commercial approach" like ‘Brain Dead’ and ‘Til Death Do Us Part’. And that is somewhat the problem here. Whereas in "Bonded By Blood" even the mid-tempo songs were venomous and had an aggressive overall tone, here they are going more and more for "happy" choruses that drifts them away from some serious Thrash to some more fun-filled party Thrash Metal. Do not get me wrong, Thrash Metal has to be enjoyable and a bit of fun or having fun playing it is part of the game, but sometimes, too much is just, well, too much. Still, the very few pieces that had the atmosphere of their previous recordings, makes this an overall enjoyable Thrash affair. After all these years, I realize that this album suffered from a playing safe attitude, maybe knowing that they didn’t want to do a "Bonded By Blood" part II. Trying to do so, they sacrificed a lot of the aggression they had on the first album, also the way they used to dare to have some crazy furious arrangements and breaks, is replaced for a more straightforward approach. This situation just continue to keep on the next albums. Had they choose to be a bit more "serious" and not wanting to be another "fun – Thrash" band, they surely were in route to at least creating a couple more of good albums. Now, if only Gary Holt has the guts to let this band in peace and not trying to recreate the magic, which is sadly gone, or better said, was left on that monument called "Bonded By Blood". Still, the few sparks of enchantment found here in a couple of songs, will make us think of the great things that were not to become… This new version also has some live bonus tracks of ‘Chemi-Kill’, ‘Til Death Do Us Part’, ‘Brain Dead’ and ‘Dirty Deeds Done Dirt Cheap’, all taken from the "Good Friendly Violent Fun" live album. I would prefer this to have the 1986 demo songs instead, but ah, whatever. This also comes in a very detailed slipcase presentation with an embossed silver logo, and what was supposed to be the original cover art (which then again reinforces my suspicious of them becoming a fun-Thrash band) and the really lame picture that became the final cover art. Yes, I am disappointed, yes I was expecting MORE, and yes it will never happen. Still some few good Thrashers here, save the damn day. I am just glad I was able to catch the band playing live with Baloff and that day I banged my head until severe pain and blood to all the classics from their debut, and some songs of this album. Now, that must mean something. www.centurymedia.com