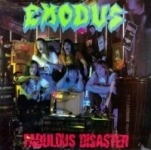 Back with a vengeance is the third album by EXODUS, a band with as grand a reputation as any Bay Area Thrash unit could ask for. “Fabulous Disaster” begins with a stern voiced narration detailing conflict among prison inmates followed then by a standard EXODUS styled riff salad opening. A worthy first taste, but the album truly beings building momentum on the second track, aptly titled ‘Fabulous Disaster’. After the thirty second monster build up riff, the song launches full throttle as only EXODUS can. Following ‘Fabulous Disaster’ is the long held classic ‘Toxic Waltz’, which enjoyed some airplay on the first Headbanger’s Ball. What seems to slightly lower opinions of the album are the two cover tunes EXODUS saw fit to include on the album. In truth, they aren’t at all bad, and in fact enhance the “good, friendly, violent fun” atmosphere that has always been present on EXODUS albums. Indeed, the band appears to be having a whale of a time on “Fabulous Disaster”. Metal with a smile. Its hard not to grin and headbang to songs like ‘Cajun Hell’, ‘The Toxic Waltz’ and ‘Open Season’. The album has been re-released at least once before on Century Media, and now here it is again, remastered, with a big size poster booklet and in a fabulous (pardon the pun) slipcase, with an embossed silver / red logo. On this special edition disc are also four bonus live tracks, taken from the “Good Friendly Violent Fun” live album (‘Fabulous Disaster’, ‘Toxik Waltz’, ‘Cajun Hell’ and ‘Corruption’). There is no escaping Steve “Zetro” Souza’s snarl, nor Gary Holt’s razor sharp riffing, and certainly not Tom Hunting’s drumming. “Fabulous Disaster” should never, ever, go out of print again. www.centurymedia.com