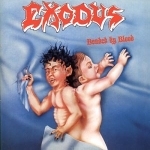 How to start the review of such a milestone album? Well, the only way is to do an imaginary travel 20 years from now back in the past… the glorious past. The year is early 1985. A demo has been circulating around with the name “A Lesson In Violence” which was supposed to be the title for this first album. This new band comprises of 5 natives of the San Francisco coast and they deliver some furious and fast Heavy Metal, influenced by a lot of aggressive Punk. The main core of the band bases around very catchy, yet aggressive and in-your-face guitar riffs. You can say they are melodic, yes, but even in their primordial melody, there is an ever constant feeling of hate, anger and rebellion. Not a single gram of silly happiness, but perhaps some drunken ecstasy. Add to that a competent rhythm section, and top it with one of the most insane vocals ever to grace a record, and you got yourself an almost new style of what aggressive Heavy Metal is. I would add the term Speed Metal to the sound, as most of the tempo on this album, specially the guitar riffs, are going in a demonic rush of adrenaline few bands can compare to. Even for a newcomer band like this, both guitar players, Gary Holt and Rick Hunolt, are wise enough to exchange riffs, leads and tempo changes much more akin to Punk bands, but completely done in a Metal fashion. Here is where the strength of this album lies, in a massive riff-o-rama fest. But that is not everything. Enter Paul Baloff, the vocalist. He tries to sing. He fails in a miserable way. He tries to shout. He does in a great way. Now mix both styles together… in another person, in another situation it will be a total disaster. But guess what? Add the vicious riffs, the pounding rhythm section, and a failure for vocalist, but a great screamer… and it all works like a damn armed 66 Mustang! This man Baloff spits poison from his tongue… every word he pronounces he does like an angry statement of fury to mankind… like a preacher of death speaking to their victims… spewing forth evil… just take this: “If you got something to say, then come my way. I’m guarded by Satan, I’m riding on Baphomet. I’ll teach you a lesson in violence you won’t soon forget!”. So true his words, this is something we will not soon forget. The dynamic reached by the band as a whole unit comes almost second to none, and even if I would try hard to compare them to any other band, it does stands as a gigantic task. Probably the style goes in the vein of SLAYER (although EXODUS started even earlier) and touches of VENOM can be found, and I would add bands like DISCHARGE have something to do with the intensity found in here. Also, I don’t know if it was done on purpose, but the album starts with the killer song that gives title to the disc, to then go onward with great songs one after the other, reaching a climax with ‘Metal Command’ which also goes as a hymn for this new generation of underground Metal bands. The album takes a small brake to the speed in the next few song, yet never letting down the intensity… until we are ready to watch our demise with a strike… with a ‘Strike Of The Beast’. If, at the end you have survived this, believe me, you will come back for more. You will be one with the blood from your head… bonded by blood. Now fast forward more than 20 years… although some and some original members are hard trying to make at least decent music with the same name (and they fail miserably, but in a really bad way) the magic found on this album has NEVER been done again… and I suppose this is thy will to be done, it is supposed to be like that. This reissue also features live versions of ‘And Then There Were None’ and ‘A Lesson In Violence’, the original artwork (there are some releases of this album going out there with an awful red and black live pic) as well as a big size poster booklet, and a blue slipcase with an embossed silver / red logo. If you have missed this album, now this is your time to get it. I was going to say that EXODUS died with Paul Baloff, but truth be told, they died some long time ago before that. Anyway, I am grateful that they released this monster of an album, quite possibly THE greatest Thrash Metal album of all time. www.centurymedia.com