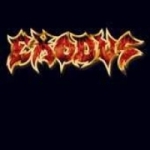 I suppose you’re less disappointed when you’re almost certain that a band you’ve once enjoyed listening to will crush your brain again, no matter how hard the big headed dude a.k.a.Gary Holt (also guitarist at times) can proclaim that they will. Call this being biased against ’em or a deserved critic, but there’s too much wrong things here again for a band which has been good enough to record two masterpieces (that includes the ’97 live album) and two enjoyable albums but also released a bunch of totally uninspired, AC/DC like releases as well and made a terrible choice when they went on in 2002 with Souza again. EXODUS 2003 are just a pale shadow of what they once were. This EP is obviously the best thing they did since "Fabulous Disaster" but it’s still way far from what they did on that record unless your ears are seriously damaged to not realise that. Out of the newer tunes on this four track MCD, only the title track has some driving force to a certain extent. Thrash Metal for sure, but nothing outstanding. The other track, ‘Sealed With A Fist’ is good for the garbage on the other hand or on a recent AC/DC record. Souza’s vocals being disgusting and the music being poor as hell. The studio version of the good old ‘Impaler’ miraculously sounds fairly potent with Souza managing to sound almost like Baloff but the version still lacks the rage of the live one from ’97. An exclusive track ends this release, this being an AC/DC cover surprisingly (haha), ‘Dirty Deeds Done Dirt Cheap’. A good cover, but EXODUS always do justice to AC/DC material, having Souza in the band helps I guess! Now after having heard the whole upcoming album as well, I can only advise you to just buy this EP as it’s an okay one and it has ‘Impaler’, a good newer track and an exclusive track. That’s way enough and will save you cash. A terrible comeback all in all, and even with Andy Sneap having done an amazing job productionwise doesn’t save a record with no substance, genius or whatever that has been written in less than one hour. Oh yeah don’t worry, if Baloff would have appeared on this, the result would have been almost the same (minus the nauseating voice of Souza), don’t be mistaken on this.