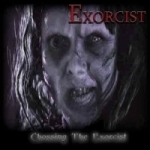 I’m no fan of IUVENES and I could not care less about this band – not to be mixed with the ancient US band – which appears to feature members of the aforementioned polish BATHORY-worshippers. Primitive raw Black / Thrash with a drum computer is a little too much for me, but despite being a rehearsal recording the sound is ok and EXORCIST’s mixture of ooold BATHORY, SARCOFAGO, old SEPULTURA and DESTRUCTION is quite enjoyable, driving but nothing extraordinary. This CD-single contains two different songs in two different versions (one mixed, the other one unmixed) and was recorded in 2001, it is definitely more a "only-for-IUVENES-fans" – thing and I consider this release rather superfluous, but decide for yourself… On www.no-colours-records.de is a sound sample, so check it out and don’t forget to try the sample of the new INQUISITION, too – that album kills!