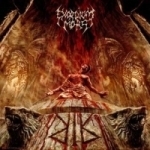 Wickedness and evilness get spred… from Auckland, New Zealand comes this deranged, devilish group named EXORDIUM MORS who’s on the loose once again, completely unchained and free to spread terror around. These little Satans’ new 4-track EP, titled "Sacrifice, Perish And Demise", is meant to raise some hell in everyone’s neighbor area – and it surely reclaims finely its purpose for doing so. Deadly, vomit-reeking and blood-spitting Black / Death Metal this is basically at its most wicked and rawest form – actually reminding me a great deal of one other band that put out one album only when they still existed… yes, "Abduction Ritual" is the name of that record I am referring to on here – and the band was FALLEN CHRIST from New York, U.S.A. EXORDIUM MORS indeed have much of the same in them music wise that could link them to FALLEN CHRIST; those nearly hysteric, ultra-fast parts that rip everything to pieces on its way, Scourge’s infamous yet absolutely bowels upside down turning vocals – and so on and so on. The connection to FALLEN CHRIST is definitely there, to be found from EXORDIUM MORS’ stuff, although when FALLEN CHRIST add a fast part to even a faster part, EXORDIUM MORS add a couple of breaks here and there – just to keep things a bit more interesting and varied for people. Plus, in addition to that EXORDIUM MORS avoid doing only 1-2 minutes outbursts of anger and loathing but want to keep their songs between 5-7 minutes in length, which only increases my respect towards them. Ah, one of the most covered extreme Metal bands ever – VENOM, also gets a song called ‘Black Metal’ covered by these furious Auckland beasts. EXORDIUM MORS have added a vast amount of more viciousness into their own version of ‘Black Metal’ – and the final ‘encore’ of the song truly put a wide grin on my face, starting from the 3:10 minute mark. Hilarious. They are EXORDIUM MORS and they only bring death, doom and destruction in their wake. You have been warned. More at: www.exordiummors.com