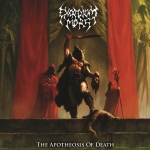 Formed in 2004, after 10 years this band from New Zealand releases their debut album, and for once, the time taken to shape this material was the right one after doing the necessary demos and EPs. The band plays in a very aggressive form of Death / Thrash / Black Metal which recalls a lot the work done by Speed Metal occultists ABSU on their last albums in many ways as well as sounding like MELECHESH although this might as well due to having similar musical foundations. The strong Death / Thrash influence is present in the riffs more than once with early SLAYER touches here and there and more than a nod of JUDAS PRIEST riff-o-rama can be found. There is a slight sound overall that gives some mystic aura to the music, it has an oriental flavor that maybe comes out as a coincidence, but also shows that the band is playing in a very personal style, where melody and aggression goes hand in hand. If there is maybe something that the band might improve, I would point to the vocals as they could have a bit more of variation here and there, but that is just a minor detail. The production values are quite good, if maybe the drum sound could be a bit better, but then again I am being a bit too picky. I sense that there is a somewhat concept history concerning the first 6 songs on the album. As this is a really great release, that must not pass unnoticed and that will surely turn more than a few heads to bang and make a devil horn with a hand. www.exordiummors.com, www.facebook.com/exordiummors, http://ibdclabel666.bigcartel.com