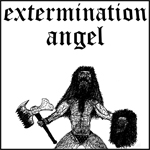 It’s not really Metal that takes up the headlines in conventional medias these days when speaking of Baltimore, though when writing for a publication that is painted by visions from the dark side, conventionalism is not always the main issue. EXTERMINATION ANGEL is hailing from mentioned city in Maryland, USA, a band name which has a ‘pun intented’ to it now, though let us leave that be for now, and concentrate on the music, on this demo release, the second demo the band has made, besides a self-titled full length album. EXTERMINATION ANGEL is delivering aggressive War Metal, heavy and raw Death Metal with punch and intensity, a big step back in time to when the greats of Canada and Australia were plundering and raping lands all around them, spreading fear and loathing, with the downtuned and raw riffing, sporadic chaotic rhythm patters and heavily reverbed and puked vocals. The music is driven by the great guitar riffing and the sticking rhythm patterns, the grim reverbed vocals add depth to the blasting assault. This is a great release to all fans of BLASPHEMY, BESTIAL WARLUST and VON to mention three of the obvious and usual suspects within this niche of rancid Metal, that call upon the armageddon, that is lurking just around the corner. Death isn’t merciless, the same can be said about EXTERMINATION ANGEL’s music. www.facebook.com/pages/extermination-angel/146644705384807, http://exterminationangel666.bandcamp.com